Mini Me Yoga was featured as one of the vendors that supports adults and children in childcare and education through health and wellness classes and trainings via mindfulness, kids yoga, meditation, and positive thinking techniques! A team of Mini Me Yoga Ambassadors, including Mini Me Yoga’s founder- Kate Bartram-Brown were at the event. Here is Mini Me Yoga Ambassador Kath Routledge’s experience at the Education Show!

I was at The Education Show at the National Exhibition Centre in Birmingham on Saturday, March 18th. I just went up for the day. Fellow Mini Me Yoga Ambassadors (and Founder!) had been there since Thursday; some all the time and others supporting on Thursday and Friday.

This was actually my first time at the NEC and I was pretty impressed by the sheer scale of it. A well organised event, but I guess they do have lots of practice!

Mini Me Yoga had a small space -initially I was taken aback but on reflection size didn’t actually matter, we were still a fair bit busier than some of the other stands. We were pretty close to one of the entrances which on the one side was a bonus – we got a lot of footfall walking our way; but perhaps not so good that one of the food outlets was in everyone’s line of vision so there appeared to be lots of people rushing towards that! Having said that we did have a fair few people walk past saying that they were in a rush to get someplace but they’d pop back and say hi later! And they usually did!!

One thing that struck me more than anything was that we appeared to be the only stand which focused on children’s mental health and wellbeing (and I’m happy to be put right if this isn’t the case). 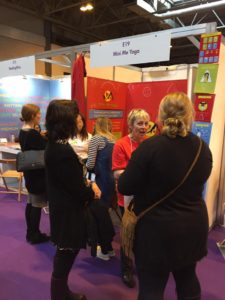 I would love to hedge a bet at the number of people who signed up to get a free Mini Me Yoga e-book; we ran out of the cards and flyers so a lot of people came to talk to us! Several hundred, at least! Just on that day!

All in all I had a pretty awesome day. People came from far and wide to attend the event, from all walks of education; childminders, to LSAs, to teachers, to nursery managers to headteachers to authors. Exactly the people Mini Me Yoga is perfect for.

So once all of you who attended the Education Show have had time to read through all those flyers you collected perhaps you’ll get in touch to find out more about how our Mini Me Yoga Ambassadors can support you in your school, setting, home!

Sign up for our free e-book here and if you are excited to learn more specifically about the foundational 2 Hour Workshop, you can buy our book here.

To look into a workshop near you, contact us at info@minimeyoga.com

For many families 2016 has been a struggle. For some of us, we are ready to toss out 2016 and move forwards to a happier, healthier, less stressful 2017! Families…

In every Mini Me Yoga session we consider the needs and individuality of each child. Kate Bartram-Brown, the founder of Mini Me Yoga, has created a programme that allows and…

Why do kids need Yoga other than the fact that it’s fun and good for you like broccoli ? One of the foundational components that I focus on when…

Mini Me Yoga programmes encourages both adults and children to explore, learn and bond. Kate Bartram-Brown, the founder, created a programme in which everyone can access and engage in yoga…

I’d like to share my thoughts on encouraging those dear but pesky little neophobic children that are present in most kitchens around the country to be happy little eaters. I…